Where did the Time Go?

I've just realised it is over a week since I last did a post on here and I've no idea where the time has gone, except that it has probably gone by in a haze of going to work and getting home too tired to achieve much of anything except washing and ironing and a little cooking and cleaning.

I've been enjoying bits and pieces on TV and for once I sat and watched television on a Saturday night which is quite unusual for me. I've become engrossed by the wonderful John Adams on Channel 4. This is a brilliant series so far and I'm really enjoying it. This was followed by a new series on BBC 2, The Victorian Farm, made by the creators of the wonderful Tales from the Green Valley which I thoroughly enjoyed. This one looks as if it will be just as good - and I find that I'm interested in this series and relating it to my family history as it is fascinating to learn how people would have lived and worked through those times. Thirdly and again with family history in mind, having found out in the last couple of years that I have ancestors who moved from Fife and West Lothian into England in the early 19th century, is The History of Scotland again on BBC 2. This is fast moving and presented in a slightly frenetic way by Neil Oliver but it is completely captivating.

I've also been reading; in particular the last two Sunday Philosophy Club novels by Alexander McCall Smith, I loved the first three and ordered the two new ones from the library and have just enjoyed the first one of these 'The Careful Use of Compliments' - I love the gentle thoughfulness of these books and the wonderful descriptions of Edinburgh and in the one just read, of the scottish islands of Islay and Jura. 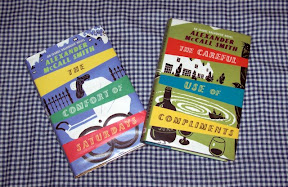 On Sunday we had a lovely visit from the son of a friend of old and his fiancee who stayed for lunch and told us of their wedding plans.

Last but not least I've been climbing in my family tree again and searching the newly released 1911 Census on line. I've found some interesting things which I'll no doubt report on later on Family Matters but for now I'm still assessing the information I've found.

For some reason I have been thinking a lot about the sea and the sand and walking on the beach and wondering if we will be able to get there this year - I hope we can. 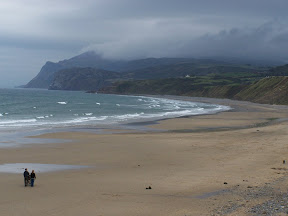 So, all in all, it has been a quiet week of pottering with this and that, no walks or visits to speak of but hopefully, weather permitting, we will be able to rectify that this coming weekend.