It occured to me last week that I actually ought to do something about preparing for Christmas; I've been avoiding the issue for ages but suddenly, I had the feeling that I should probably start the shopping. With this in mind, one day last week after work, I walked up into the City Centre to see if I could make a start. I struggled around WHSmith but did manage to get what I wanted and also queued for stamps in the Post Office - now in Smiths. I dashed into M&S but couldn't face the rugby scrum at the checkouts so left there empty handed and foolishly entered Woolworth - I took five steps in saw the sea of bodies and turned round, walked out and caught the bus home, with the intention of trying again the next day. Three days later I still hadn't done any more towards present buying so, yesterday, we decided to see what we could find elsewhere. Our first stop was Amerton Farm near Uttoxeter. 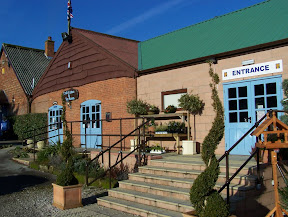 It had been ages since we visited and there were many changes but so many lovely, pretty and festive things to look at in both their garden centre and gift shop; some things very expensive but others at a surprisingly modest price. Here we managed to buy small gifts for all my little great nieces and nephews and gained a couple of ideas for the adults too. I began to relax a little knowing that we had made a good start. 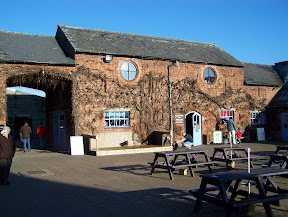 This place is interesting at any season with plenty of space for everyone and lots of things for children to do including a play barn and farm animals. There are lots of smaller shops too including a jewellery shop, pottery and bakery. 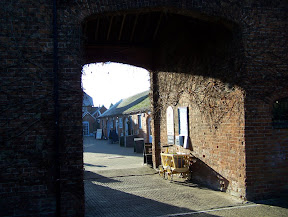 I couldn't resist taking the photo below of the cake and sweet shop - what great cakes in the window. Surely they can't be real cakes on display? The designs must be achievable though! 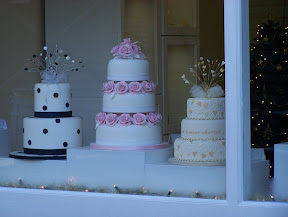 There is also a steam train enjoyed just as much by mums and dads as it is by the children. 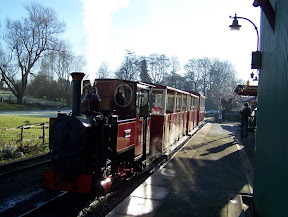 We then set out towards Rugely stopping at the Wyvern Garden Centre at Wolseley Bridge to see what we could find. As we were wandering around we spotted Father Christmas buying his Christmas cards at the R.N.L.I. charity stall in the entrance hall. He saw a little boy coming towards him so turned and asked him what he wanted for Christmas. In the split second it took the boy to answer my mind, bathed in nostalgia, thought - a teddy bear, a red train, a jig-saw puzzle and a Christmas stocking full of sweets, nuts, chocolate pennies and tangerines - the words X-Box and Nintendo whisked me quickly back to the 21st century - I only hope that those things bring as much magic to the little boy as the less technological presents did to me over 50 years ago. We moved into the centre and managed to find a couple more present here. 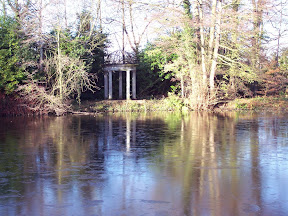 Next to the garden centre, which is close to both the River Trent and the Trent and Mersey Canal is Wolseley Gardens, run by the Staffordshire Wildlife Trust. After a picnic lunch in the warmth of the car we had a walk around. The lakes were frozen and looked beautiful in the sunshine. Water birds were standing and slithering on the ice and ducks were flying overhead looking for somehwere less icy to settle, perhaps unnerved by the souind of the clay pigeon shooting coming from the nearby Shugborough estate. 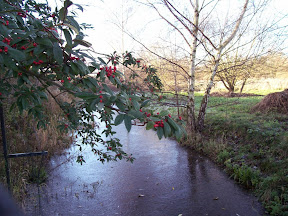 The river, too look cold and icy. There were plenty of birds flying around and gathering at the feeding stations and bird tables. Including this festive little fellow. 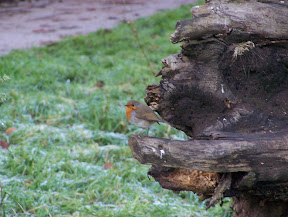 Just before this photo was taken of the antiques barn across the road from the gardens a group of about 30 ramblers, all dressed in red with santa hats or deer antlers on their heads marched by on their way to walk along the canal side. 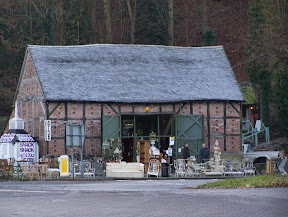 All of a sudden I felt slightly festive and a lot more positive; perhaps all the preparations for Christmas wouldn't be so stressful after all.
Posted by Rosie at 8:54 am