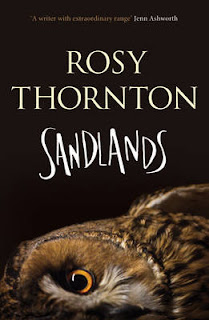 A few weeks ago I mentioned that Rosy Thornton had sent me a review copy of her latest book which this time is a collection of sixteen short stories rather than a novel.  I have previously reviewed two of her novels and I will put links to these reviews at the bottom of this post.  I have spent the last week reading Rosy's wonderful stories and I've enjoyed them immensely.  I had to limit myself to two stories a day but I could have read more as it didn't seem as if I was reading totally separate stories as similar themes and characters run through them all.


Rosy's wonderful writing draws you into each story with her poetic descriptions of the land and her sometimes amusing and sometimes poignant observations of people and places, of nature and nurture and the performing of simple everyday tasks.  The linking of these stories is in the history of place and of the people within that place.  Of several generations each affecting the other often in the same family through ancient houses, letters and old photos, of things that have gone before.

The stories are set in the county of Suffolk on the salt and sand marshes where fogs and floods are always present or threatened. There are many themes running through each story mostly of past and present merging, of early beginnings, superstitions, old traditions, the fragility of life in both human and animal world, of birth and death.  There is also always the threat from the closeness of the sea, fear of innundation, threats from those beyond the seas like maurauding Danes in the early centuries of the county's history and Dorniers in the skies during the second world war. Also running through the stories are strong, practical women, women coping with motherhood, pending motherhood, the loss of a child or spouse, widowhood and loneliness.   There are the academic men in their ivory towers like Mr Napish in High House, the narrator of Silver Studded Blues in his museum and Dr Whybrow in his Martello Tower in Whispers.

Another theme through many of Rosy's stories is flight.  World War Two planes overhead, old wartime airfields, later sites of protest against nuclear warheads, now wartime museums; seeds of rare wildflowers cast into the wind, the silver studded blue butterflies rising in a mass from the heather on Blaxhall Common, the sand blowing into houses in coastal villages and most notably of birds. A barn owl guarding letters in an old Oxo tin hidden in a tree, the sad, plaintive call of curlews as night falls across the marshes, oyster catchers feeding along the estuary and rooks nesting in the horse chestnut trees at the edge of Willett's farm, the nightingales who sing to the son of an Italian prisoner of war as he walks to visit the farm where his father worked on the land during his capture.

A lot of the stories are based in one village, Blaxhall and its church with its female rector who is on maternity leave, its bell ringers, its pub The Ship a centre for both the characters of the village, a group of aged folk singers plus the people who visit, whilst working on archaeological digs or researching ancestors. The meeting of the old ways and the new, pagan practises, Christianity, folklore and mystery.


I have enjoyed reading these stories very much and I'm sure I will return to them later this year to read them again just for Rosy's descriptions of the landscape she loves and writes about so well.

Here are links to my other reviews of Rosy Thornton's books

A Tapestry of Love
Ninepins
Posted by Rosie at 8:41 am